On the 15th May 2016, two teams met on the hallowed Green, now called the “Foreman Square”, the standard approach was taken, the school would bat first.

The school opening pair of Ollie Collins and Gus Simon faced the OSA pace attack of Matt Edwards and Sam Guy but still got off to a good start with some nice batting and the score began to creep up.  The OSA took their first wicket with 47 runs on the board when Gus Simon was caught by Toby Pumfrey for 17.

Ollie Collins was then joined at the crease by Ted Bloomfield and between them, they continued with confident batting and the score began to steadily increase.  Fortunately for the OSA, we had agreed beforehand that if a batsman reached 50+ he would retire to enable others the opportunity to bat, so after hitting a very impressive 57 which included 4 sixes, Ollie Collins retired.

With the score at 103, Ted was then joined at the crease by Ben Cottey-Hill who made a respectable 4 before being bowled by Toby Pumfrey. This brought to the crease Finley Allen who set about hitting anything he could for four!  Once again, the score began to move up until at 167, Ted hit a high one that was very well held onto by Phil Edwards on the boundary off the bowling of Mr Shelley!

Finley was then joined at the crease by Ben Townley but at the same time, the OSA changed their attacking approach with a mix of spin from Ishan Patel and some slow / medium paced mixed bag from James Luto.  These changes lead to some quick wickets when Finley was bowled by James Luto for a very respectable 45 which included two sixes. The score was 170.

Ben was then joined at the crease by James Boxford who unfortunately only scored 1 run before being bowled by James Luto, the score being 173. Alfie Lister was next to the batting crease and between him and Ben they made a respectable 15 before Ben went for 10 caught by James Luto off the bowling of Jon Guy. The score was now 188.

Elliot Brown walked onto the crease, took his guard and hit a very respectable straight drive for 2. It was a shame that his partner at the crease, Alfie, could not replicate the shot as he was caught for 4 by Toby Pumfrey off the bowling of Sam Guy. 190 on the score board and one batsman to go.
Mr Edlin entered the now hostile breach with Elliot at the other end offering encouragement and advice on the current bowling attack.  Whilst the OSA could see the end in sight, Mr Edlin hit a nice four only to be bowled the next ball by Sam Guy!  That was it, the School had set a very respectable and challenging target of 194, ably assisted by 2 no balls, 7 wides and 2 byes.

A quick tea and minor team talk by the OSA, where the captain James Luto had to convince some of the team that they were capable of batting further up the order and that there could only be one number 10 or 11 batsman!

The school all fired up with a fine target for the OSA to try and reach opened with a very good attacking force of Mr Edlin and Alfie against the not so willing openers of Matt Edwards and Toby Pumfrey!

The OSA took on the challenge and made great roads into the target of 194 with some good consistent batting by Matt and Toby. Unfortunately, Toby played around a straight on and was bowled for 11. The score was 43. James Luto joined Matt at the crease and made a short lived 18 before he hit a high one which was well held by Mr Edlin on the boundary. The score was 79.

Ishan Patel entered the crease to support Matt who now had his eye in and was looking very comfortable, so much so that, when he hit 52, we had to apply the already agreed rule and he reluctantly retired. The score was 128.

This brought Phil Edwards into the game. Phil had not picked up a bat since leaving the school some 33 years ago!  He looked a natural, even with the school cricket helmet on.  Ishan took the next ball and was unfortunately bowled, the score still 128. Jon Guy joined Phil at the crease and the runs picked up again, with Jon making a very quick 16; a four and two sixes before being given out LBW by Mr Shelley! The score was now 147 and we were still in with a chance.

Jon was replaced at the crease by his son Sam who was filling in as a ringer for the OSA and he supported Phil with some very good attacking and entertaining batting!  But this pairing was not to last long as Phil was bowled for a very good 18. The score was 151.

Tom Shambrook entered the affray, looking very confident with his head held high. He took his guard, looked around at the field, and let the first one go by. He looked the part from square leg but unfortunately, he completely missed the next one and the bails flew far beyond the wicket keeper!  It was a good looking 0!  Still 151.

This brought Mr Shelley into the game. Not known for his cricket ability, being more of a tennis player so I am told; the first ball he received was hit for a nice four.   Sam was next departing the field with a respectable 4 and the score stood at 155. This brought Jack Kearney into the game. Jack had come to watch and was asked to play at the last minute. Jack played some very entertaining shots for his 6 and supported Mr Shelley as they increased the score.  When Jack played an amazing shot on a ball going down the leg side, by swinging his bat behind his legs, we were all amazed!  The surprise on the face of the fielder when the ball just landed straight into the hands was priceless.  Had it come off, it would have been the shot of the day!  The 194 score was still achievable, if we were lucky.

The final batsman was Mr Taylor-West, the Headmaster, who, due to some spirited fielding had pulled his hamstring. This meant that Jack had to stay as his runner.  The last few overs passed and we were left with 12 off the last over!  Some great shots from Mr Shelley in the last over, including a six, got us to 191 with one ball to go!  Alas, it was not meant to be and 191 it finished.  Mr Shelley ended with an excellent score of 27 not out and Mr Taylor-West (and Jack) backed this up with a nice 4. Final score: School XI – 194 for 8, OSA – 191 for 8.

It was a great game, with lots of very friendly banter and with both sides playing some excellent cricket. It was also nice to see the majority of the school team also play club cricket for Steyning. I would like to thank the Pumfreys for scoring and Mr Harvey for stepping in at the last minute to umpire.  Thank you to all the players and supporters & I look forward to next year! 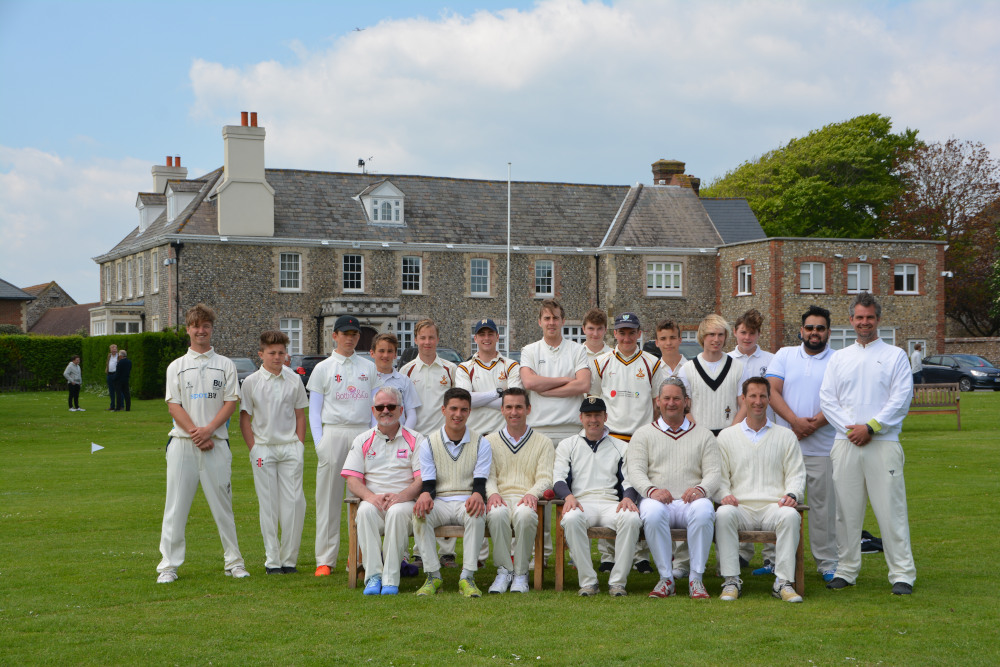